*WARNING: NOT FOR THE EASILY GROSSED OUT*
(at least for the first part)
... I hope Kitty doesn't think I'm a weirdo after this.

So I've been having some problems. Some pooping problems, according to Mom. I don't think so. But apparently it has been too soft of a consistency for too long and Mom was starting to get worried. She did some research and thought maybe I was lacking nutrients. Google suggested to add pumpkin and/or yogurt for fiber and other vitamins. Let me say, hot doggie it was DELICIOUS! I'll eat this stuff any day! 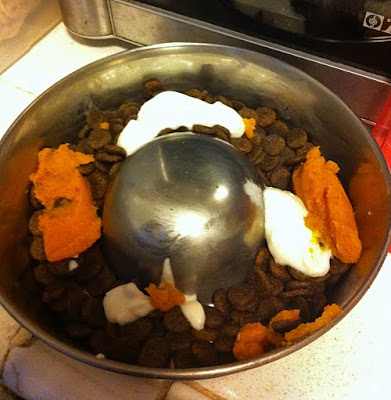 But that wasn't doing the trick. Although it did stop me from having choking spells from inhaling my food! So Mom made me an appointment with the Vet. No I wasn't shaking while walking up the steps to the Vet's office. No not me. ::shakes head:: Ok maybe I was. But my brother has told me stories about that place. So I saw the Doc, they weighed me, and I'm a muscular 17 lb dog, but I'm also a sensitive one at that. I don't like people messing with my paws or my ears. But the Vet did something that I was not expecting. She um... well she was talking about glands. And I don't know what glands are but soon after her hands were on my 'glands' and squeezing and it was NOT fun! Thank DOG I was out of there after that! Mom and the Vet talked. Mom gave her a sample of my poop. I thought that was funny. Bol. And the Vet gave Mom some pills for me to take. 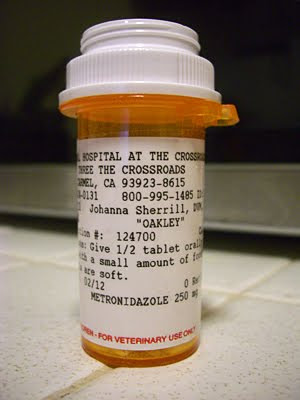 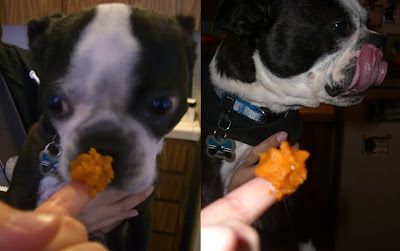 I don't know about this.

Good news though, Vet called, said there weren't any parasites or anything abnormal about my poop. Just a little grainy. Looks like the Vet ratted me out on my sand and dirt snacking. I knew I wasn't supposed to like this Vet person. Hmph.
We left the yucky Vet's office and we went to go pick up my brother at home. 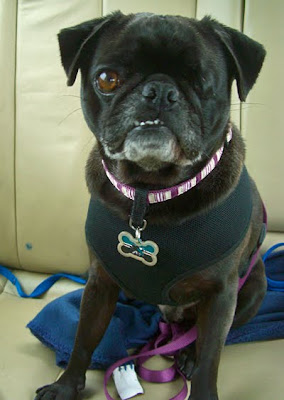 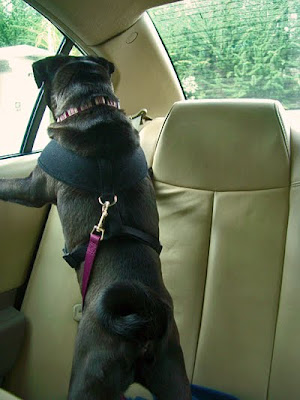 He was pretty excited to see where we were going. I was kind of being moody. I felt like I had just been violated. 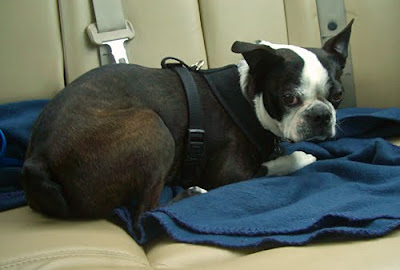 But all the moodiness in the world couldn't keep me from being happy when I realized where we were going. As much as you humans might not like this word, we were going to work. We love work! Mom works for two doctors and we get to come along everyday and sit and play in their ginormous yard. But the doctors are on vacation and they gave Swisher and I the important duty of feeding their family pet, our friend, Suessy. She's a cat friend. So we went to go visit her and we got to run around. 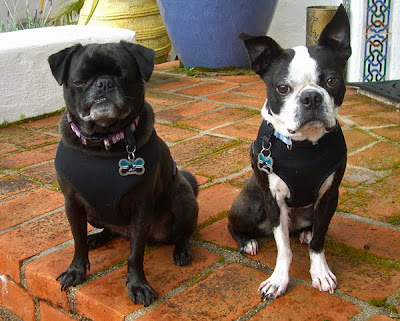 ...check out the view. That's the Pacific Ocean in the distance. 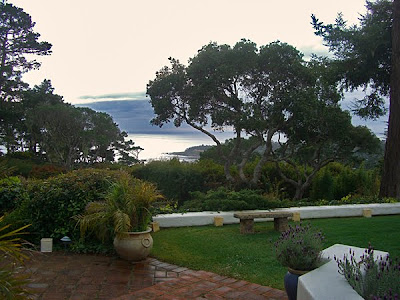 There are so many places to run around and explore here it's so much fun! It's like a jungle! Don't worry, we know the grounds pretty well. We could be your very own tour guide. 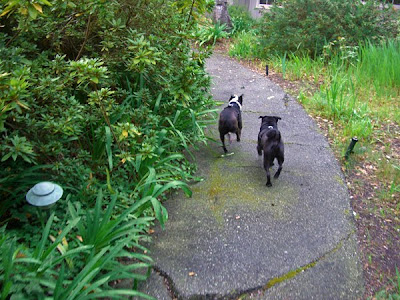 This is the entrance to OUR courtyard. Well we call it our courtyard because this is where we hang all day while Mom is doing all the actual work. Bol. 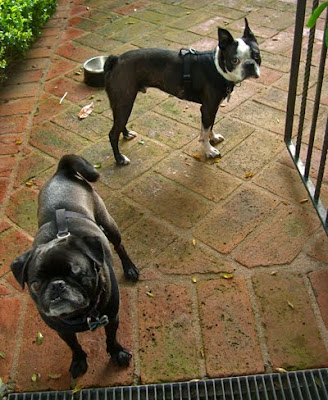 This is our bench we sun bathe in during the nice days or curl up together during the cold ones. 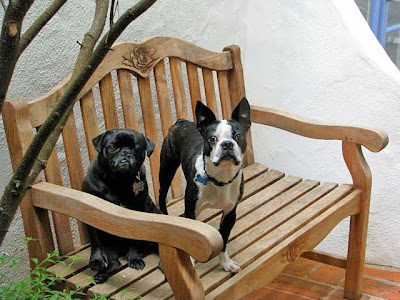 One of Swisher's favorite places to hide, are up these stairs. 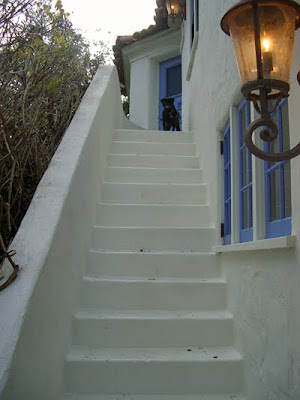 There's only one problem.... He doesn't know how to get down! Bol 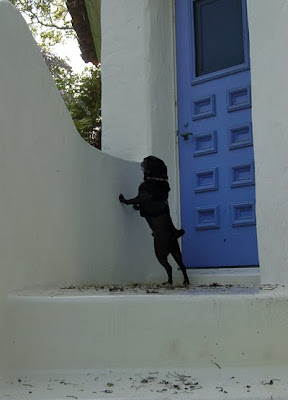 Someone always has to go up there and bring him down. That someone is usually Mom. I tried... 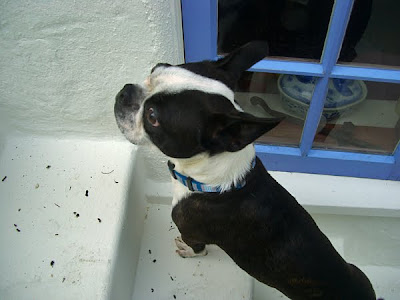 
This is what we've been waiting for!
This is our favorite thing to do at work.
Swisher tries, but I always get the ball. Bol.
After all that running around on the wet grass, we were very thirsty... 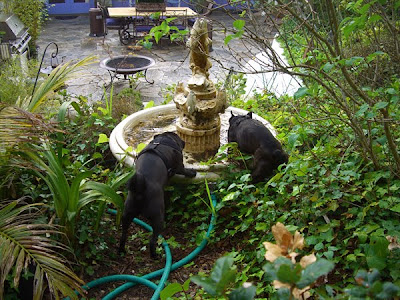 ...and dirty! Mom had to give us sink baths. There was no way she was gonna let dirty, smelly, wet dogs in her car. No matter how much she loves us. 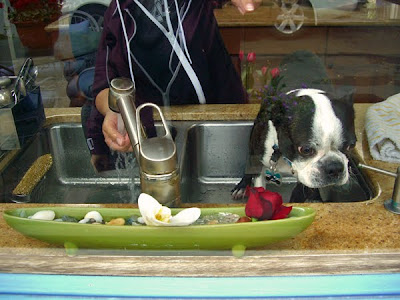 Sink baths are new to me. I've never had a sink bath before. I think I was a little afraid of that garbage disposal.

Swish on the other paw is a pro. Grew up with them. Took 'em like a champ. 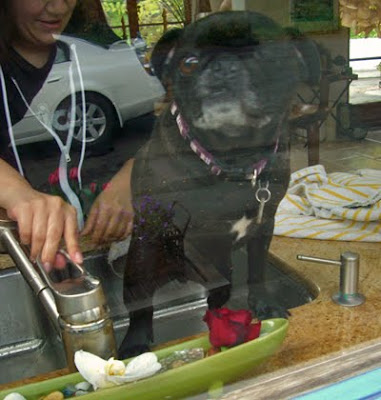 We sure were tired after playing fetch. All there was left to do was nap on our way home and enjoy the rest of the week off. Hope everyone has a good week. 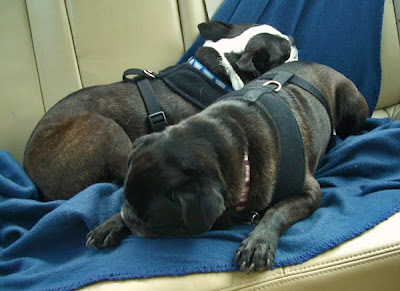 Lots of Licks,
Oakley
Posted by Oakley and Swisher at 6:13 PM