Just like our girls, Kitty and Coco, pawmised us... we got our packaged from them and it arrived on Valentine's Day. 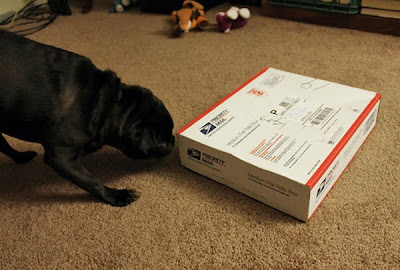 Inside there were two paw-made Valentine's Day cards. And they were right, lots of eye candy. Hubba Hubba! 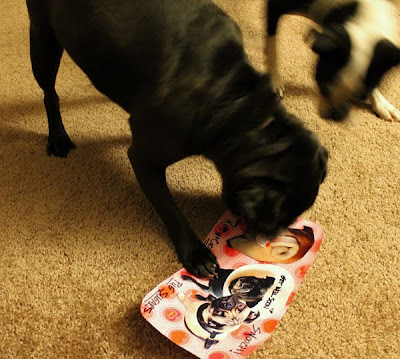 Thank you Coco, I AM feeling much better. Thank for you for the smooches. Butt sniffs right back at ya! 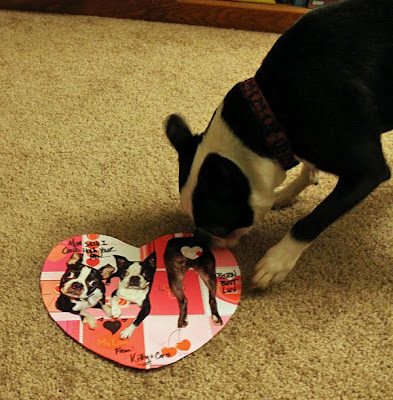 Your paw is so soft Sweet Kitty. There's nothing better than Boston butt luv!


Also inside, were some great goodies! 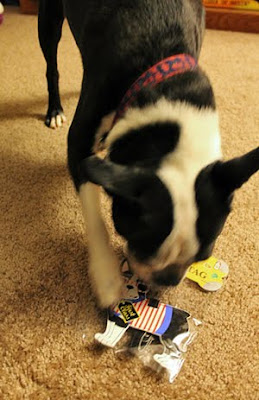 Oakley got his very own Boston Terrier luggage tag. Which is going to come in very handy next month when Mom and Aunt V go on vacation and we get to spend a whole week with Grandma. Swisher has a Black Pug luggage tag, but Mom hasn't been able to find a BT one. PERFECT KITTY!

And since our girls know us so well, they know the type of toys to get us. They sent a strong durable KONG toy with rope for Oakley. 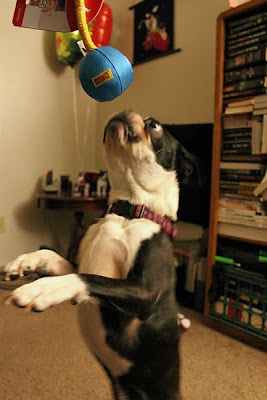 I went to work at it right away! 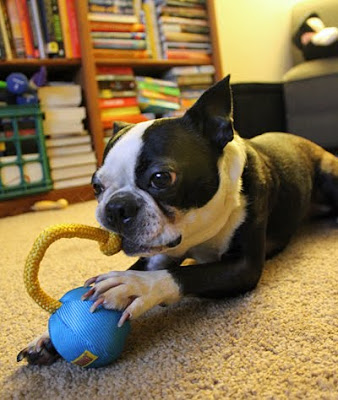 And Swisher got a soft stuffie that says Puppy Luv. 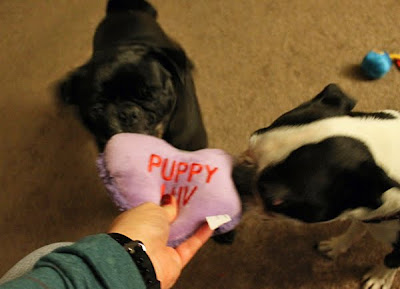 One of Oakley's favorite games is to try and steal any toy from my mouth, but this toy was from my girl and I WASN'T going to let him win!
It's allllll mine. 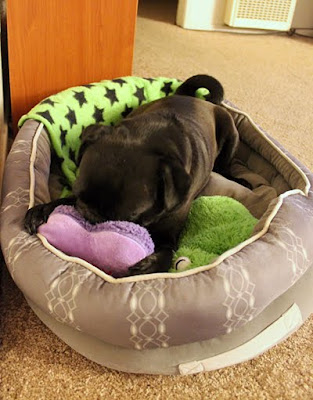 So I took it to my bed where he couldn't get it.
Then we also got some cool looking rawhide baseballs. 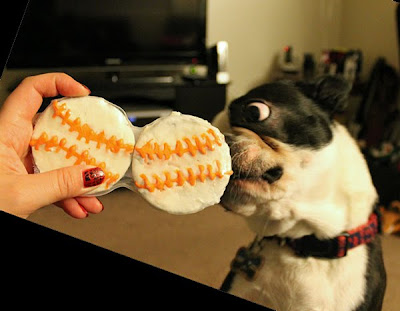 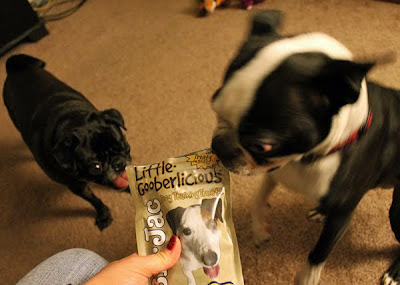 We love peanut butter ANYTHING, so we asked Mom to open these up right away!
MMMM. So yummy!


Thank you SO SO VERY MUCH girls! We always love what you send us. Hope you like what we sent you for Valentine's Day.

Lots of licks,
Your dudes,
Swisher and Oakley

Posted by Oakley and Swisher at 2:45 PM 9 comments:

We just wanted to wish everyone a HAPPY LOVE'S RUFF DAY! 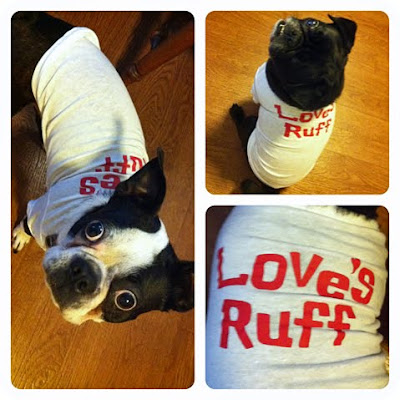 It's especially Ruff since our girlyfuriends, Kitty and Coco live all the way in Alabama. Just to let you know girlies know, we got your special package and we will be blogging soon about it.

But this day is also shared with my girl Coco. Today is a special day for her because it's her.... 3rd Birthday!
HAPPY BIRTHDAY SWEET COCO!
You don't look a day over 2 girl! 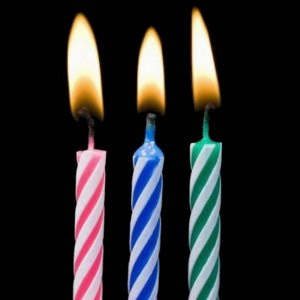 I hope when you blow out your candles, you make 3 wishes instead of one.


Lots of Birthday Licks,
Swisher.... and Oakley
Posted by Oakley and Swisher at 6:40 PM 5 comments:

And the Winner is...

Hey Everyone!
Today will be a quick post. We just wanted to show everyone who the winner of the 100th Post Giveaway is. Thank you everyone who commented and all who sent that Good JuJu Juice to help me get better. I truly believe it helped!
We had a total of 14 comments and we put them into a Randomizer to help us decide. (We were having some trouble posting the link, but never the less...) And the Winner is....
Number 7! That goes to Punchy, Chloe, Zoey, Rosie, Marty, Kiki, and Stewie from PugPossessed! Congratulations!
If you guys could please peemail our Mom at oakleyandswisher -at- gmail.com with your physical mailing address, we will get your winnings to you asap! Be on the lookout for something like this! 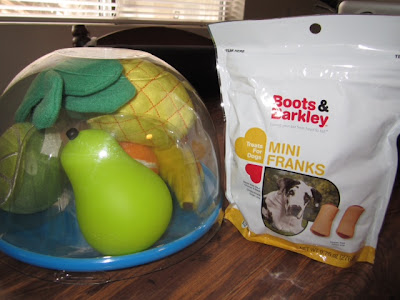 Thanks again for commenting, and Congratulations!
Lots of licks,
Swisher and Oakley
Posted by Oakley and Swisher at 11:45 AM 5 comments:

Here it was. The Big Day. Moment of truth. If my eye wasn't better, it meant surgery. 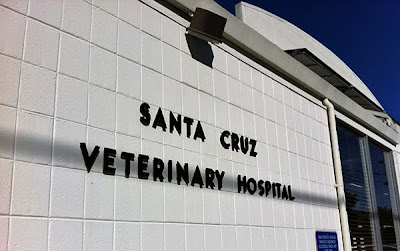 I was a little crazy yesterday morning in the waiting room. Mom was trying to calm me down, and Aunt V who came along, tried to distract me. It wasn't working. I was climbing everywhere and smelling everything and barking at people and animals. But hey, this was a big day. I was woken up early, I didn't have breakfast, and I was a bit nervous. I was feeling ok though. My eye hasn't been hurting much, and that was a good sign. But that might be because I'm a tough guy and much doesn't bother me. It was still the Doctor's decision. 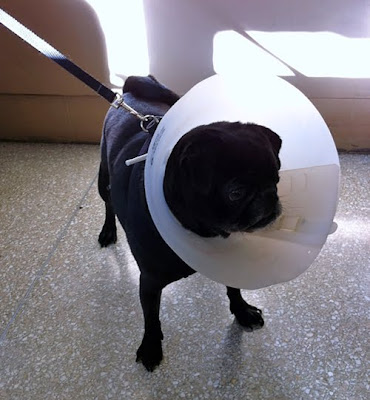 The Doctor came in, asked Mom a few updated questions. Mom said that she thinks I'm better. Told the Doctor I hadn't been squinting as much, and my eye was hardly ever red. She also told the Doctor she's been putting the new medicine as directed, but that I still get goop in my eye in the morning. The Doctor then dabbed a little piece of paper in some dye looking stuff, touched my eyeball with it, and got her special looking glasses and tools. She checked and said those magical words... "You're right. He's better!" Yup! You read right, I'm better! Not 100% better, but my eye is doing what it's suppose to be doing now. It's about time right?! The Doctor said "Go ahead. Get outta here. No surgery. Come back in a month!" What great news it was! We asked about the Cone of Shame and she said just as a precaution, let's do two more weeks of it. Two more weeks I can live with!
To celebrate, Mom and Aunt V took me to Betty Burger's in Santa Cruz. They shared their half sweet potato fries and half regular fries basket with me... 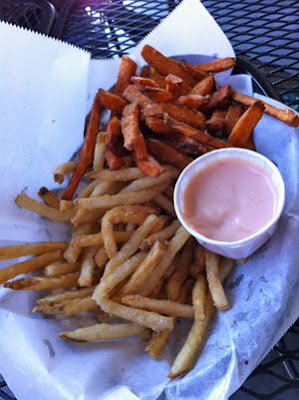 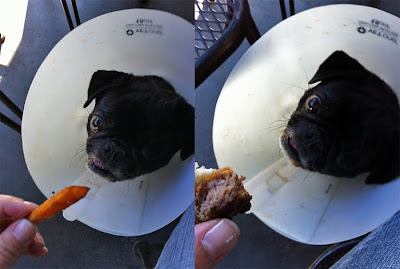 When we got home, Mom said because I was doing so much better, I could have an hour of free time with NO cone of shame! I was SO HAPPY! I got to sit on Mom's lap without fear of hitting someone with my cone, or be in the way of the TV. Mom always says "Swish I can't see with your satellite dish in the way!" Bol. 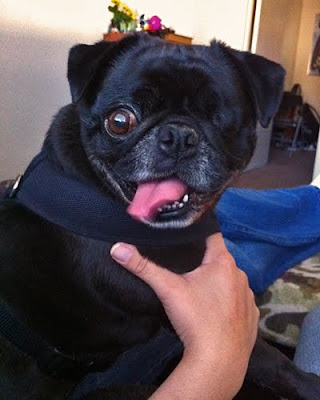 I got to chew on some bones with Oakley... 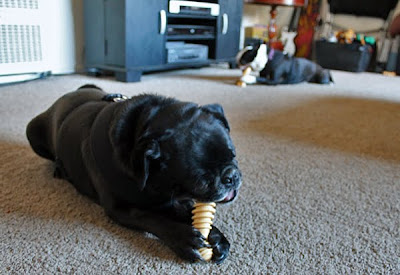 ... and Mom brought out some new stuffies! 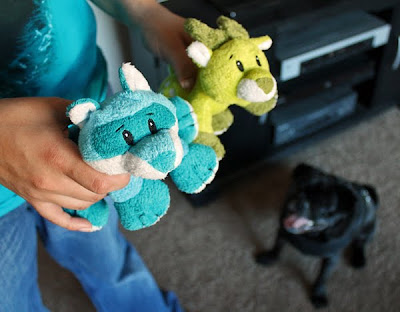 I owe everyone a BIIIIIIIG THANK YOU! Mom, thank you for taking great care of me all the time and thank you for the new St. Jude charm that helped protect me. 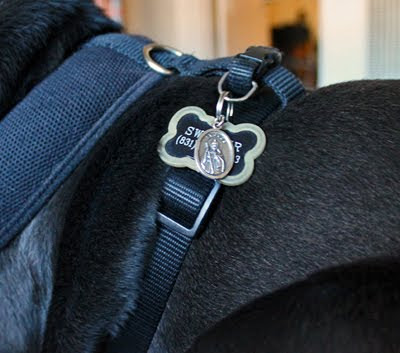 To all you Furiends out there, THANK YOU all for the good JuJu Juice you sent me. It totally worked! Whenever you need some, I'll be sure to send twice the amount!

And a special thanks to the big DOG upstairs for watching over me too, and who's gonna help me get back to 100% in no time!

(Thank you Aunt V for helping me write this post. Bol.)


PEE.S. You still have time! If you haven't already, don't forget to leave a comment on our previous post for a chance to win a special prize!
Posted by Oakley and Swisher at 6:05 PM 10 comments:

We apawlogize for being MIA for almost a month now. Our lives haven't been too exciting lately. Swisher has been the main priority around here. We wanted to update you guys about him since you all sent that good Juju juice. As you can see, he's still wearing the Cone of Shame and is not 100% better yet. 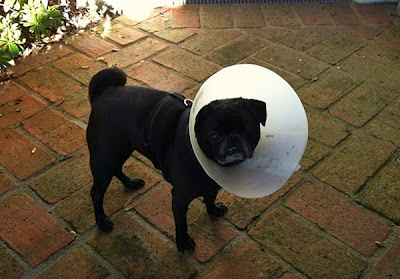 He's already had a few special eye doctor visits. When he went back after the first visit, they said it wasn't better. Continue meds and Cone of Shame. For his next appointment, no change. So they did this procedure called Burr Ketatectomy, where they put some numbing medicine on your eye and then with a special tool, they remove stuff from the top layer of the eye. He got meds and more Cone of Shame time. His eye was really red the next day, which worried Mom, so she took him in to get checked. Eye Dr said it was normal side affects from the procedure, and gave her some pain meds to put in his food. Eye Dr also told Mom that if he doesn't start to heal faster, they were going to do another procedure called a Keratectomy, where they sew his eye shut just a little to help his eye heal. He had been doing good for a while, but last Friday he started squinting and his eye was watering a lot. So Mom took him back, they checked him out. Still not much change. So Eye Dr just decided to do the surgery that morning. They made room for him on the schedule, called in all the appropriate nurses and doctors, and even shaved his arms to get ready for the IV. 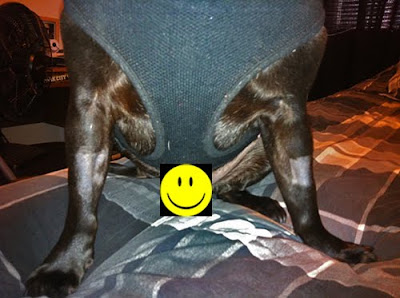 Then they asked Mom if he had eaten that day and she said yes, and just like that, the surgery was canceled. The surgery needs to be done on an empty stomach. So Swish was released. They gave Mom new meds. Instead of eye drops, they gave her some ointment to put in his eye, more Cone of Shame time, and said see you in 2 weeks.
So Swish has 2 weeks to get better. And since you all sent Juju up the wazoo, Swish saved some extra Juju in his back pocket in case he'd need anymore for later. But feel free to send as much Juju you want. We pawmise not to put it to waste.

Swish is a soldier though. He's still the same crazy big brother as always. He gets to come to work with me and Mom more often now. We hang out in our patio and play. 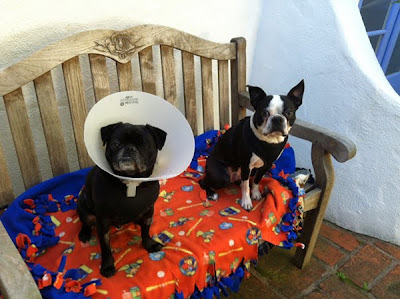 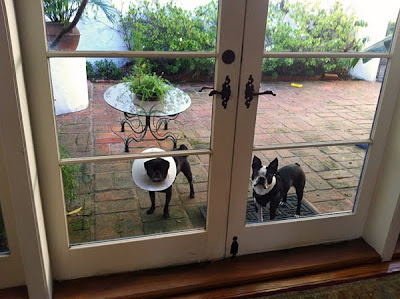 I'm not afraid of the cone much anymore either, I can get close to him and cuddle... when he let's me. Bol. 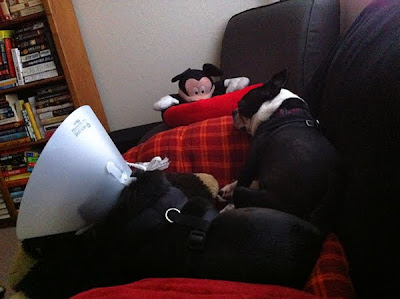 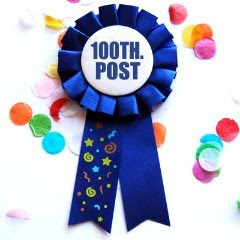 We wanted to do something special for all our special blogger furiends out there. After all, we wouldn't be here if it wasn't for you guys and gals. So it's pretty simple. No essay writing. No application qualification. No contest. It's easy, just leave a comment. You have until next Saturday midnight our time (we live in CA), and we'll randomly pick a winner (we'll contact you later for your physical address), and that winner will get a special package in the mail. Isn't that pawesome!

Thanks so much pals and gals! You guys are great!

One more exciting bit of news! ... We're on TWITTER!

That's right. Anyone who's on there and wants to chat, drop us a line @OakleynSwisher . We already started following some of you. We enjoy catching up with you guys.

We apawlogize for the long post. Hope to hear from you. Get those comments in for a good prize!

Lots of licks,
Oakley.... and Swisher
Posted by Oakley and Swisher at 1:25 PM 14 comments: