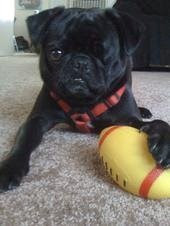 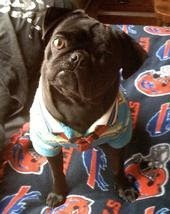 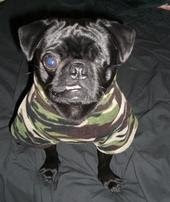 So I am here to introduce myself.  My name is Swisher and I am almost 3 yo.  I am a black pug.  I was named after Nick Swisher the baseball player.  I was named after him when he played for the Oakland Athletics; now he plays for the Yankees and I don't like that very much but I do like my name.  I am not named after the Swisher Sweet cigars even though a lot of people think that I am.  I live with my human mom someplace in California.  When I was still a puppy I was out on a walk with my mom and this mean man had his dog off leash.  The mean man told my mom that his dog was just going to smell me.  My mom thought I would be ok and that maybe I would even make a friend, but as the mean man's dog got close enough he attacked me and bit my face.  The mean man later told my mom I probably attacked his dog first but that is a big lie.  I don't remember much of what happened after except that now I only have one eye.  My mom took care of me and the mean man never even helped with my doctor bills.  I am just fine with only my one eye, sometimes if I run around too fast I run into stuff but I try and be really careful.  My good eye is starting to get a little sick but my mom is putting these icky drops in it (when I let her) and making sure I am going to be ok.  Last week when I went to see my eye doctor she gave me a new nickname; "wild child" because I wouldn't sit still long enough for her to take pictures of my eye.  I like my nickname and I think it suits me well.
About 6 months ago my mom brought home a new dog.  I guess he's my brother now, I never wanted a brother but he is fun to have around.  I will let him introduce himself to you.

Posted by Oakley and Swisher at 6:10 PM